On our recent trip to Monument Valley Tribal Park, we stayed in beautiful downtown Mexican Hat, Utah, which is about 20 miles north of the border with Arizona .  We arrived during the last few days of February, and most places around there were closed for the winter season.  I suppose the people who live around there were on vacation elsewhere.  Their season officially starts March 1.  One place that was open was The San Juan Inn, a solid 2-star rated motel.  It’s actually rated 2.5 stars on Travelocity.  It’s a 2-story motel essentially, and all rooms face the San Juan River, which runs right past it.  We ended up spending three nights there.  I bought the first two nights on Travelocity, and then I bought the third night after we arrived.  The lady who works the front desk gave me $5 off what I paid through Travelocity, which I thought was nice.

It’s not fancy, but it was really comfortable.  It was very quiet during the time we were there, so it was easy to sleep and the bed was quite comfy as well.  The people who work there are also very nice.  We ate at the on-site restaurant the first night.  We each had a Navajo taco.  These things are huge and take up a whole plate.  I wasn’t able to eat all of mine.  I’m trying to eat less meat these days, so I had a vegetarian Navajo taco.  John had a regular Navajo taco and he said it was good but he described the meat as “mystery meat,” which makes me think of the ground beef you find in a Taco Bell taco. 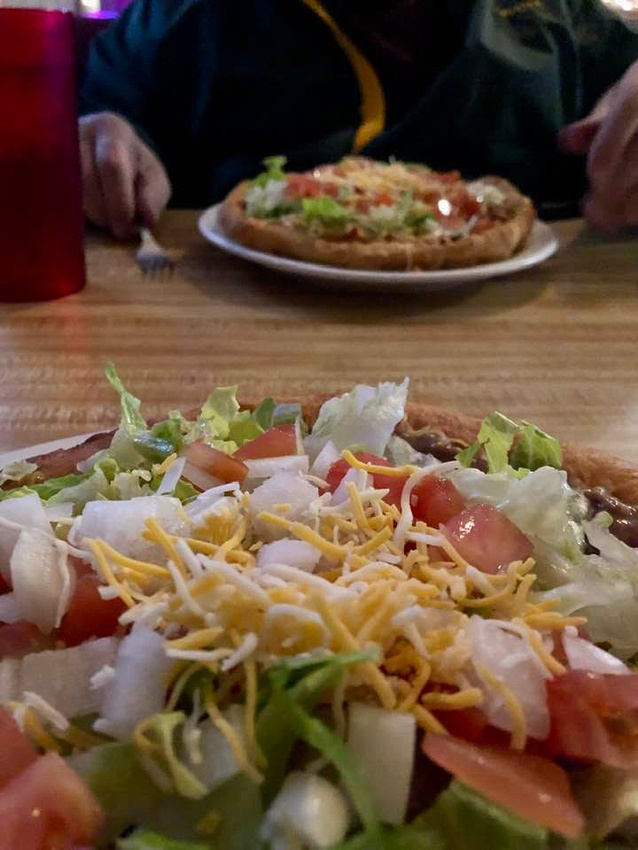 People who know me well think of me as “The Cat Whisperer” or, "The Crazy Cat Lady" and so it was funny when the motel cat decided to follow us to our room.  We let him in, and he hung out with us the first evening we were there. We asked someone what his name was later and we were told his name is “Garage.”  A strange name for a cat, but ok.  When we got back from dinner the first night, he was sleeping on our bed.   This is the kind of thing some people might not like, but I found it hilarious! 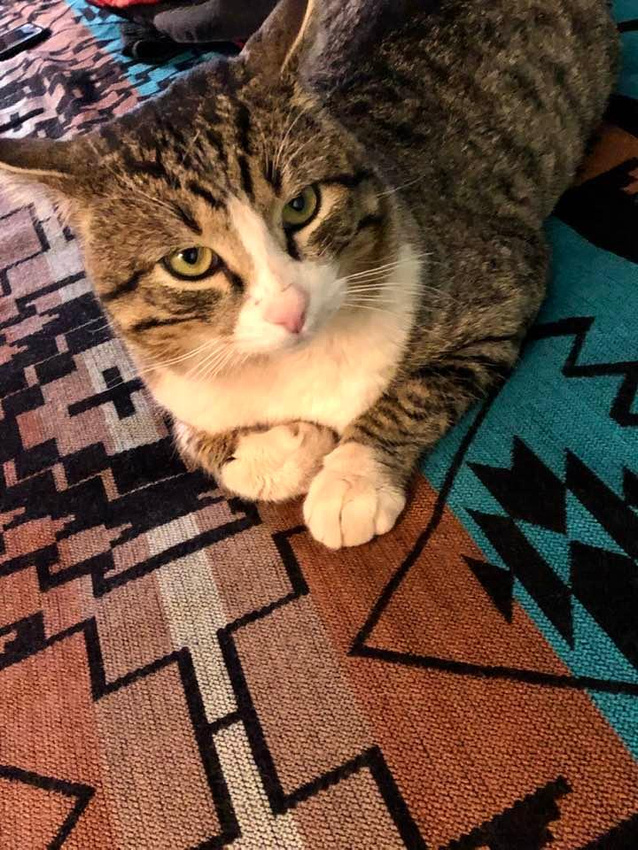 Garage KittyThis cat followed us to our room the first night after we met him in the lobby. Here is is making himself at home on our bed.

I used to have a fairly decent collection of matches from various restaurants and bars until most places quit providing them after smoking in restaurants and bars became illegal.  But I have good news!  The San Juan Inn has matches!  I picked up a couple of books.  My match collection has been stymied for years and also my cats have used some of them to play hockey with so I’m missing quite a few.  I’m hoping I’ll find them under the sofa one day.  In the meantime, it’s nice to find some replacements! 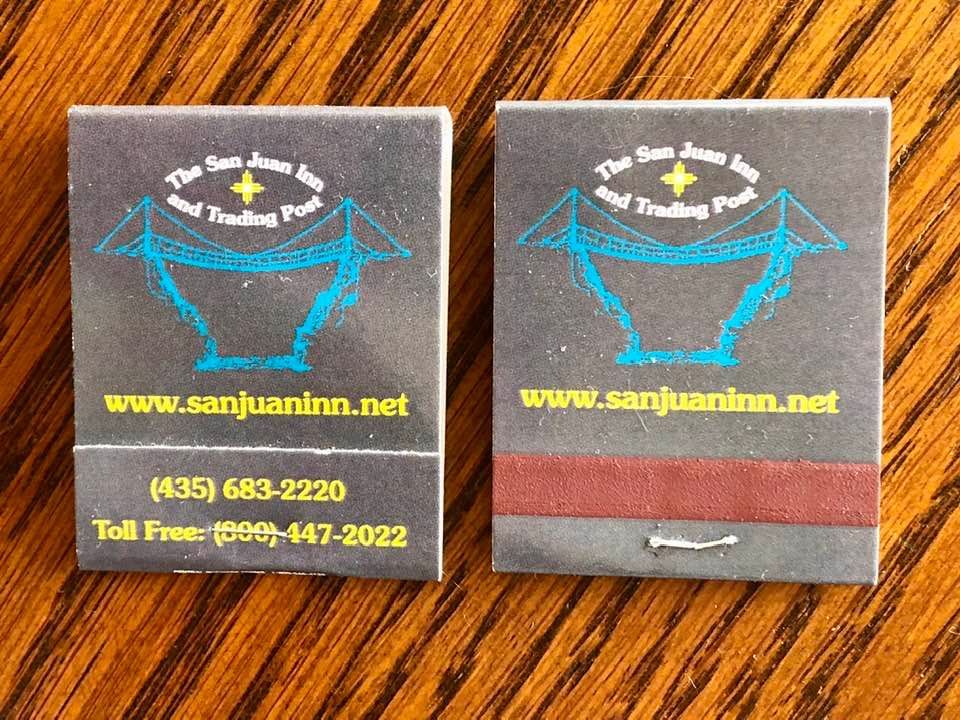 While we were in the area, we checked out a few petroglyph sites, among other things.  Some of the best ones we saw were at a place called Sand Island Recreational Area.  People mostly go to this place to camp and fish but there’s a great petroglyph panel there as well.  It’s now protected by a chain link fence, but I think the panel was unfenced and unprotected for many years.  There is some modern graffiti there and some of the petroglyphs have been vandalized.  It’s interesting to note that the book “Custer Died For Your Sins” was published in 1969, so the graffiti with those words was etched into the stone sometime after that. 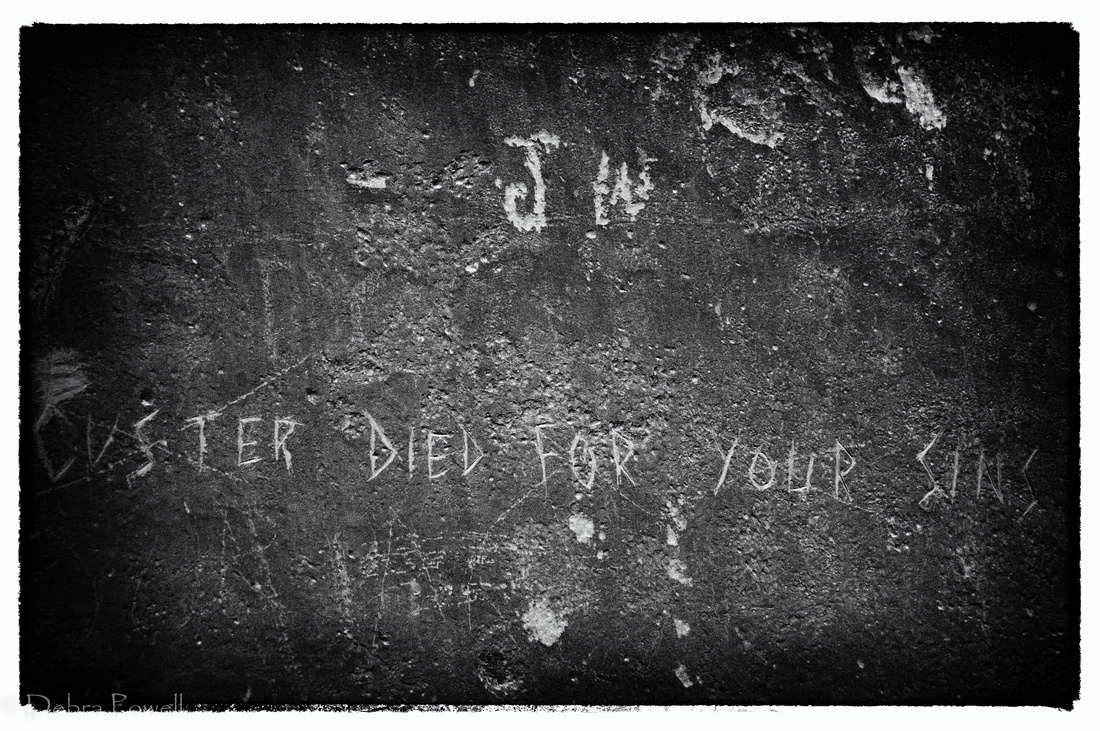 I can’t help myself from wondering what the original artist was trying to tell us, since these panels are mostly ways of telling a story.  The panel with all the animals has a lot of pecking of dots around it for instance, which makes me think that maybe they’re telling us about a hunt in the fall or winter, when it was snowing.  And then there’s some that have what appear to be lightning strikes around them, so maybe these things happened in the spring.  There’s even a cowboy on a horse, so this makes me think that it was probably done in the 1800’s around the time of The Indian Wars.  There’s also a picture of a baby, and something that I’m not sure, but it looks like intestines.  These are not the best-preserved petroglyphs I’ve seen in Utah, but it’s still a nice panel. 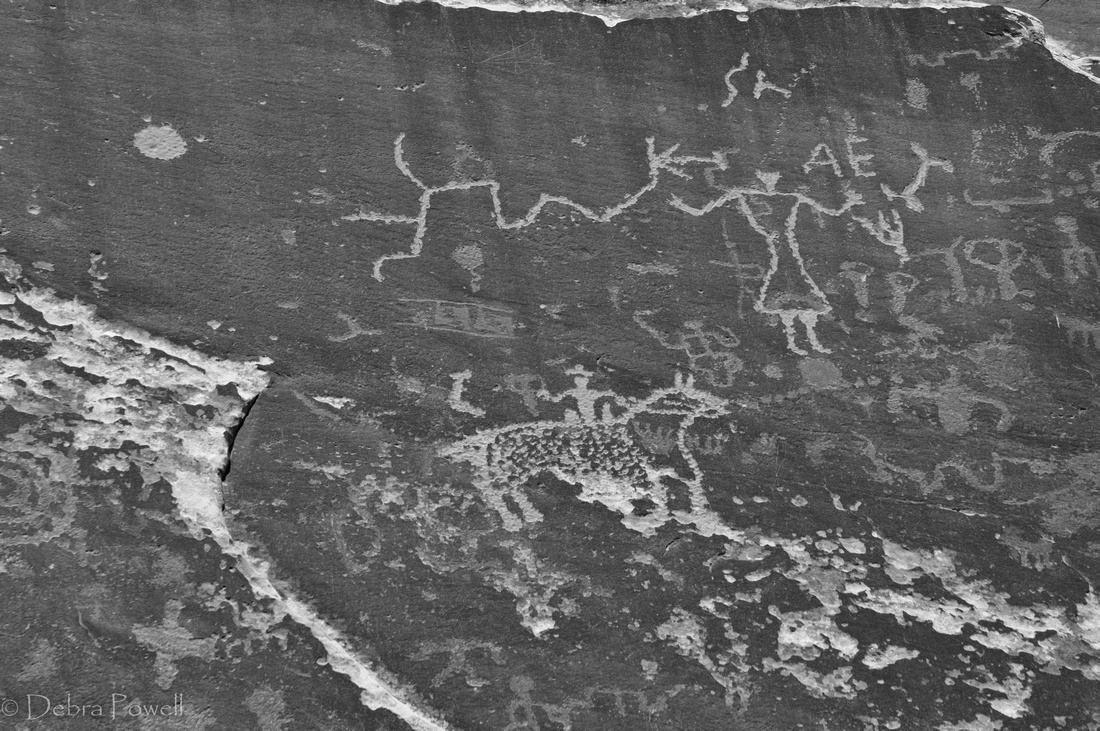 022722-4Petroglyph with what looks like a cowboy on a horse, a lightning strike and perhaps someone conducting a ceremony, along with some earlier, fainter 'glyphs 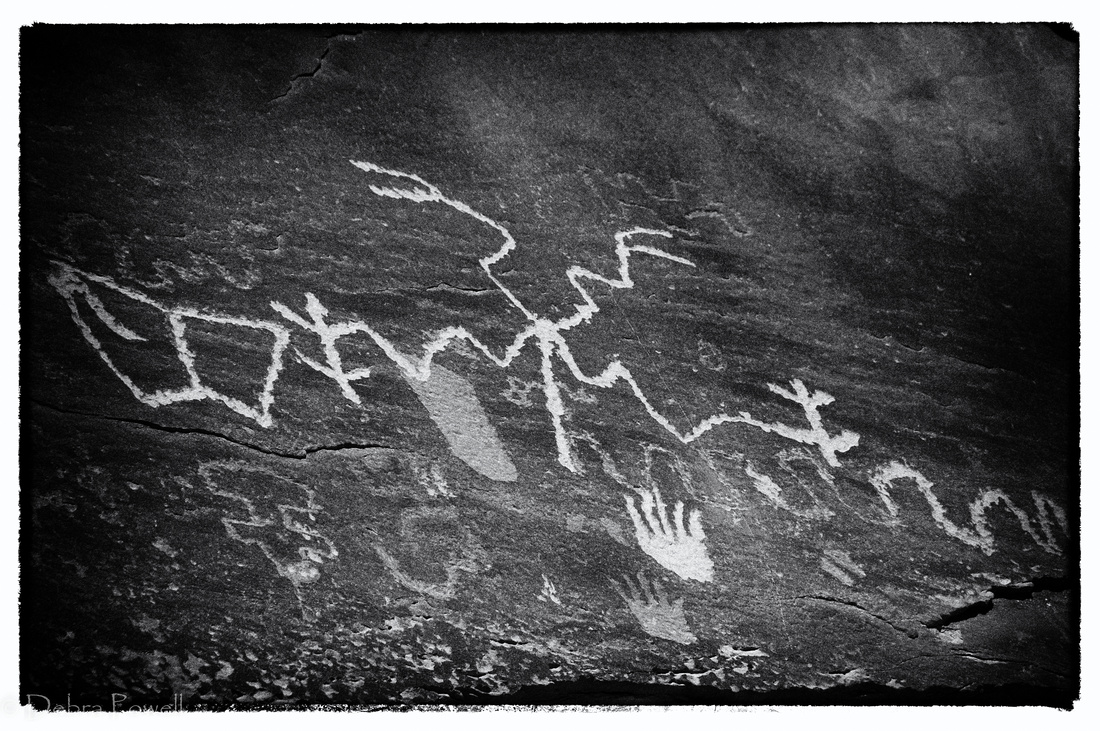 Your guess is as good as mine, and I'm guessing here, but looks like lightning strikes and a hand with 5 fingers.  There was also something else on this panel which I didn't seem to get a picture of, that refers to the number 5.  Could it have been something that happened in May?  I also see something that looks like a snake and something that could be a fish.  This would be possible, since this panel is very close to The San Juan River.

Petroglyph hunting has become something I like to do when I can.  It can be both very rewarding and very frustrating.  Especially frustrating when I’m told they’re there, but I can’t find them at all.  Sometimes John has good luck finding them when I can’t.  It’s like not being able to see the forest for the trees.  I feel oddly protective over these things and get upset when I hear they’ve been vandalized, which happens from time to time.  Listen people.  This is why God made cameras.  Everyone has a camera in their pocket these days.  Use it to record the ‘glyph.  You don’t need to touch the petroglyphs or try to make etchings of them.  Leave them as they are so that your children and grandchildren can hopefully see them and appreciate them one day. 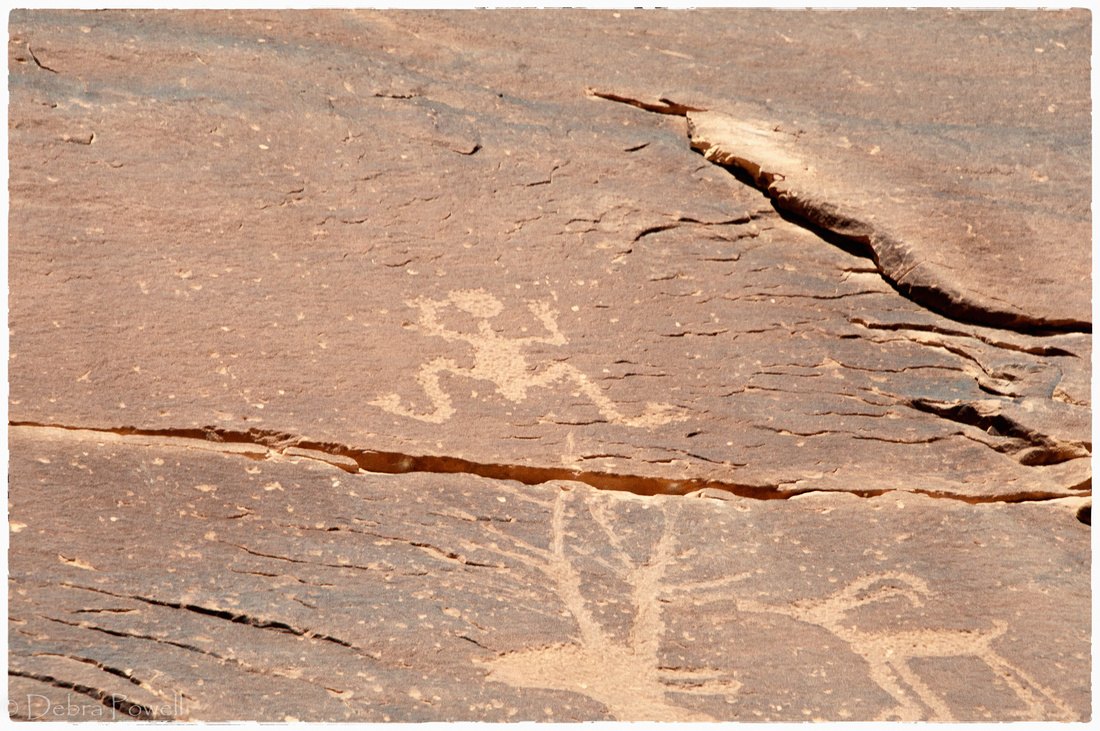