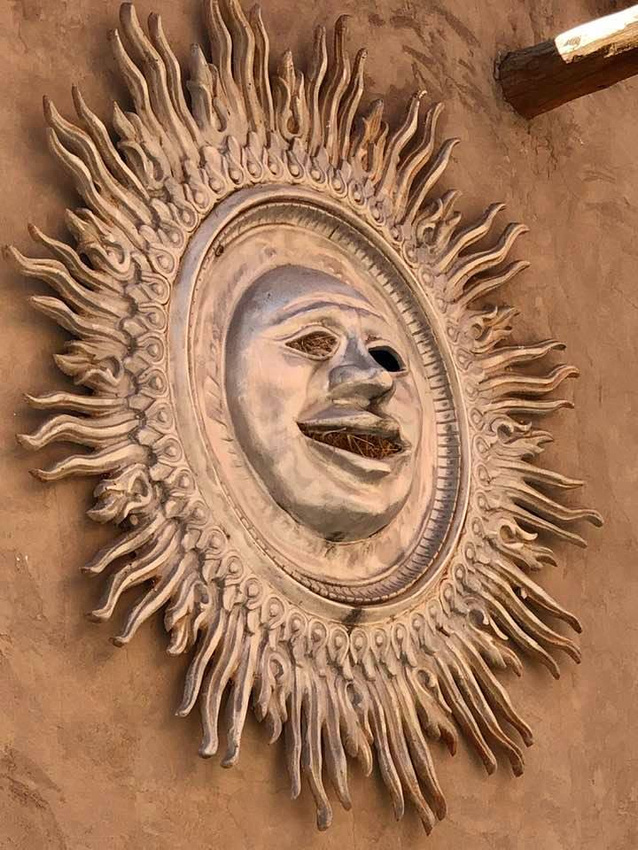 SUN SCULPTURE AT NEEDLES DISTRICT OF CANYONLANDS NATIONAL PARK - WITH BIRD'S NEST INSIDE!

As I’ve said for years, if you can’t go wider, go deeper.  Between Covid restrictions and other personal family reasons, we haven’t flown anywhere in over a year!  We do try to get out every week though to explore and find some new territory.  During the month of April, we spent a great deal more time exploring Utah.  In looking back through my photos over the last few months, I was surprised at how much ground we’ve covered!  I spent an extraordinary amount of time looking for petroglyphs.  Not because they make for great photographs, but mostly it’s to make a connection with the ancient ones.  The most difficult petroglyph for me to find was Intestine Man, which was hiding in plain sight right on the main road into Canyonlands National Park.  I’m glad I didn’t give up!  We went back and wandered around pretty much aimlessly, or so it seemed, at least three times before I found him. The photo of him which I’ve attached is a cell phone shot, (as are almost all of the photos in this trip report.)  Then, we spent a fair amount of time hiking and driving around Canyonlands National Park.  I discovered a great overlook there that I hadn’t seen before and made some pretty dramatic images at sunset there. 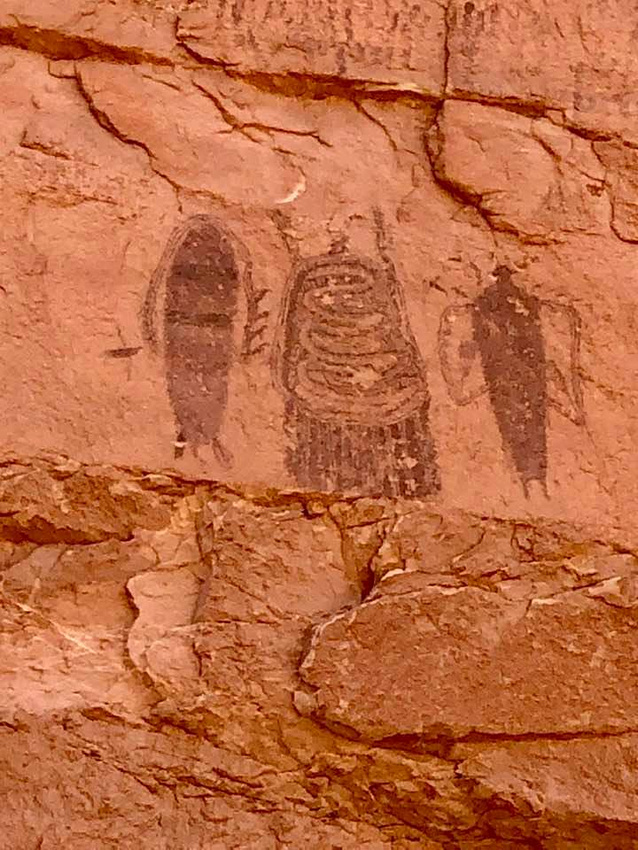 Another week we took a somewhat longer drive and visited The Needles Section at Canyonlands.  Wow!  A whole new place to explore!  It’s quite off the beaten path and doesn’t get near the traffic of Arches or the Island in the Sky District at Canyonlands.  Just the drive out to the park is something like 40 miles of jaw-dropping beauty.  It’s very hard for a photographer not to stop at every turn! 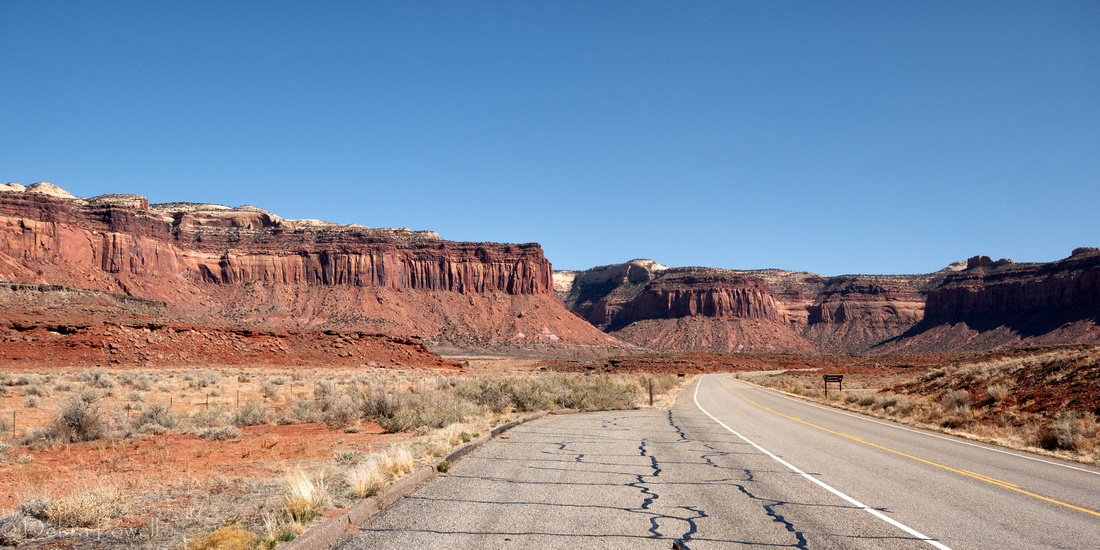 On the way down to this section of Canyonlands, we stopped at a crazy tourist trap called Hole in the Rock and took a tour of the house that Alfred and Gladys Christensen built by carving it out of the stone.  Yep, they carved a 5,000 square foot home out of the rock and lived there for years.  We took a guided tour of the home, visited the gift shops and looked at all the sculptures and various items that they have to look at outside.  When I posted about our trip to this place on Facebook, I discovered that one of my Facebook friends, Lyle Nichols, who is a local sculptor living near me here in The Grand Valley, has several pieces of his metal art sculptures on display there!  I didn’t know this when we were there, so now I’m looking forward to making another trip out there to check it out again!  This is a short, inexpensive diversion when you’re on a long drive.  If you have kids or grandkids in tow, they’ll love this place.  It even has a zoo!  So worth it.  It’s right on Hwy 191 in SE Utah – right on the way to Canyonlands. 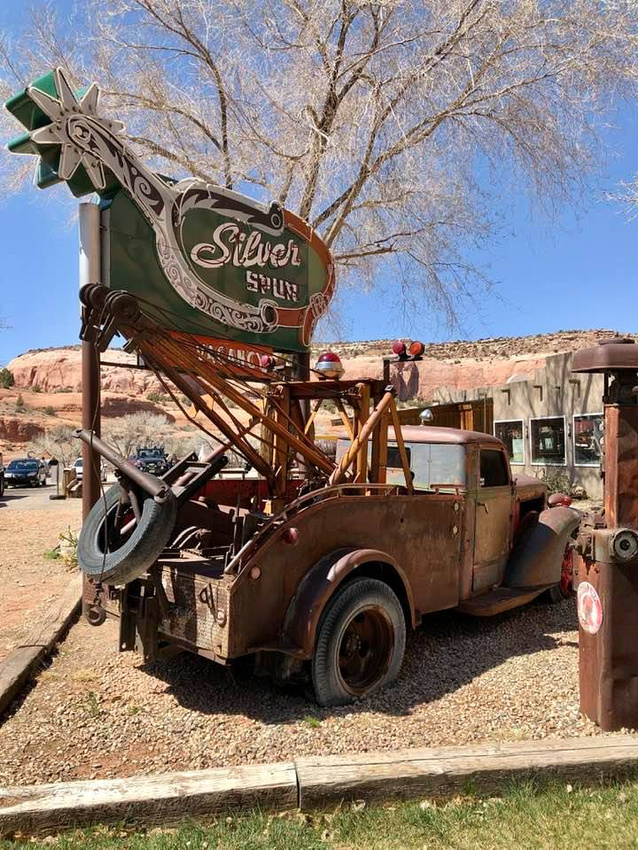 Old Truck at Hole in the Rock

OLD TRUCK AT HOLE IN THE ROCK

Old Truck at Hole in the Rock 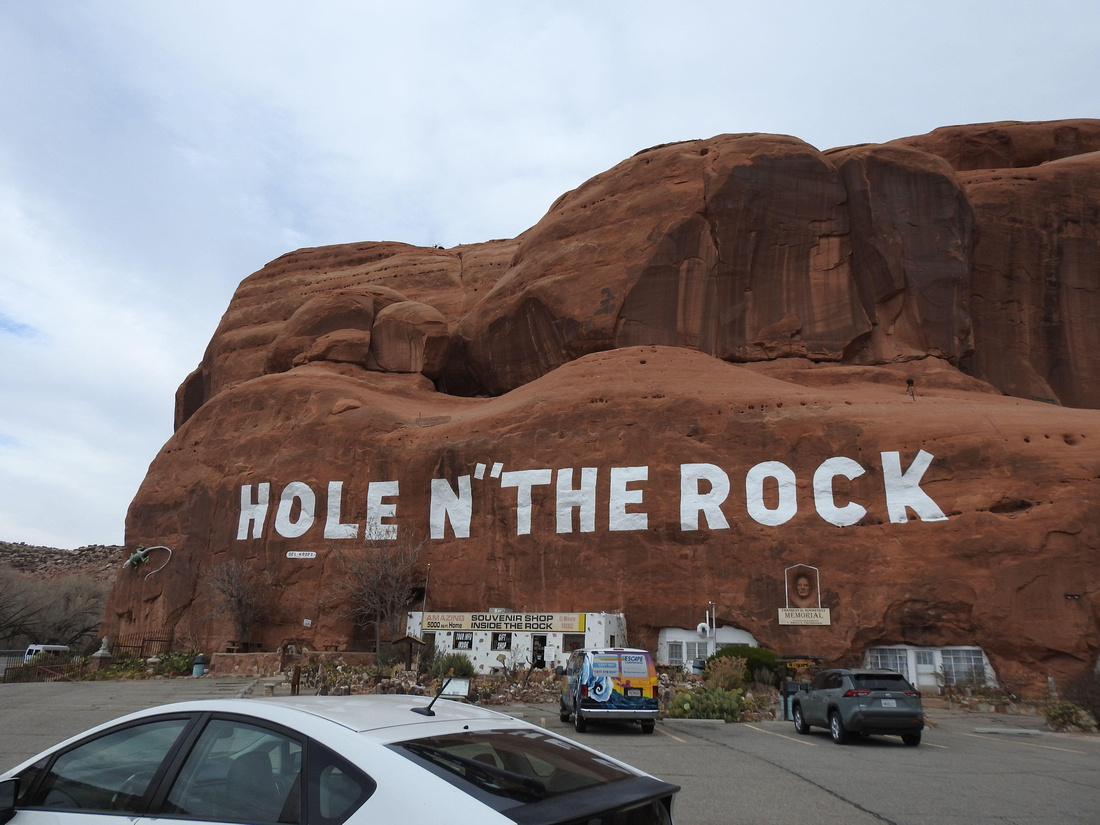 Hole in the Rock

The Crystal Geyser is another kind of cool, kind of funky place we discovered in the desert outside of Green River.  It’s sort of SE of town off some dirt roads.  It’s a geyser that was capped during an ill-fated oil drilling event back in the first half of the 20th Century.  Now I don’t know anything about the oil business, or why someone would want to drill in a place where there is a known spring, but they did.  Anyway, the geyser went off, and it’s still going off today.  It’s not nearly as dependable as say, Old Faithful or anything, but it goes off a couple times a day whenever it feels like it.  In case you think that we’re alone when we’re out wandering around in the desert, let me assure you that more often than not, this is not the case.  We were there on a Thursday afternoon, and there was a big group of motorcyclists also there! 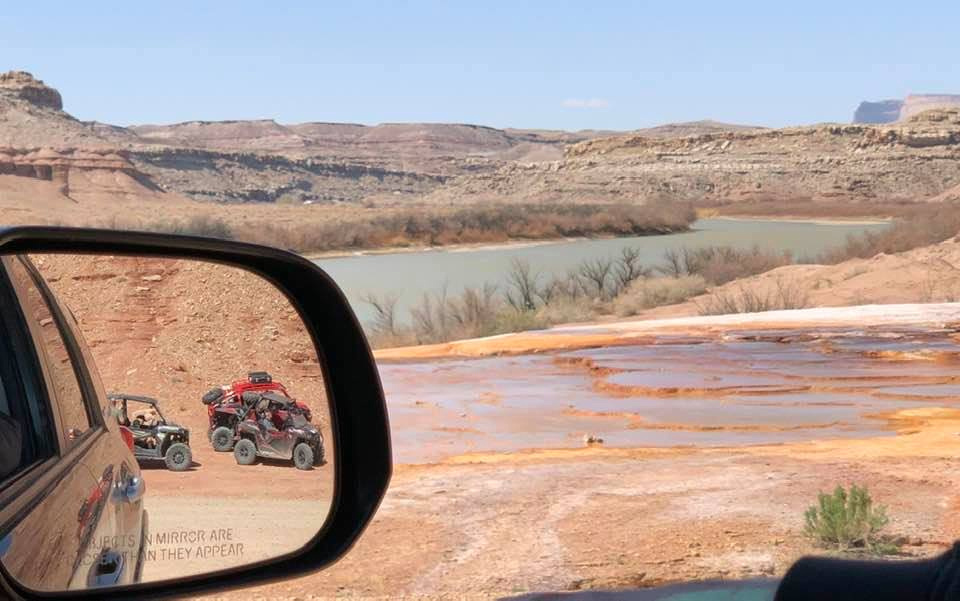 Another neat place we discovered just north of the City of Green River is Swayze’s Beach.  A real, white sand beach shaded by cottonwood trees alongside The Green River.  I definitely plan to spend an afternoon here doing nothing again soon!  You can camp here for $10 a night if you’re so inclined.

And speaking of Swazye’s, (we were, weren’t we?) these four brothers (unknown relationship to Patrick Swaze) roamed around the Central San Rafael Swell in the late 1800’s and early 1900’s, running cattle through the area.  Out in the desert off I-70, and then down several dirt roads, you’ll find Swayze’s Cabin, a small cabin built 100 years ago where the brothers could stay while rounding up their cattle to take to market.  I had a friend ask me how to get there.  Well, it’s hard to explain and my best directions go something like this, “Go until you feel the need to turn….”  There are detailed directions somewhere on the internet. 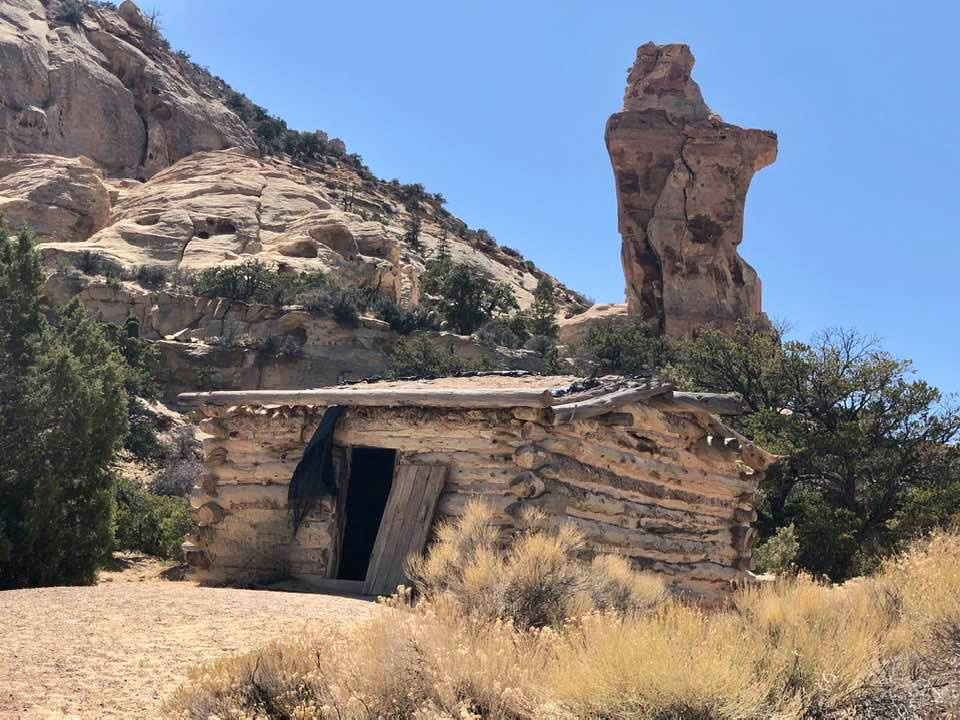 And finally, Tamarisk is a great place to stop for a meal if you’re in the Green River area, heading in either direction on I-70. We stop for lunch almost every time we pass by.  The food is great and the views are wonderful.  It’s located right along the bank of The Green River, in – you got it – Green River, Utah.  I had this plate of fish tacos, which was delicious, but I couldn’t eat it all – they’re not skimpy on the portions!  Since we’ve been vaccinated, it’s really nice to be able to eat in restaurants again without worry.  Utah has mostly done away with their mask mandates, with the exception of Grand County, which has two national parks and lots of tourists.  We usually wear our masks indoors and in restaurants until we’re seated. 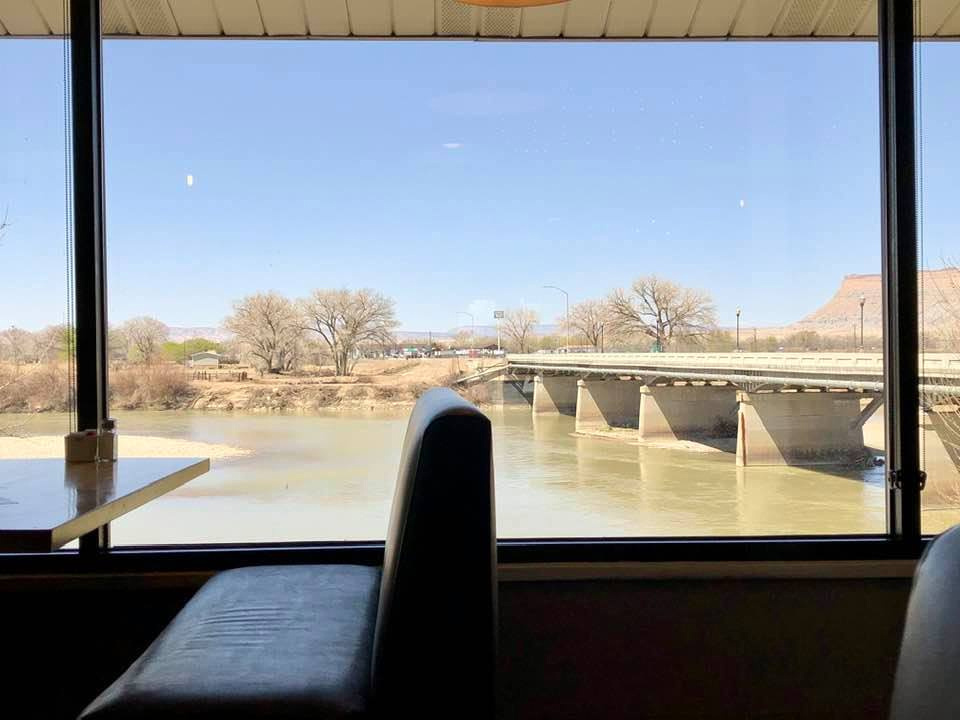 View from Tamarisk, a restaurant in Green River, Utah

VIEW OF THE GREEN RIVER FROM TAMARISK 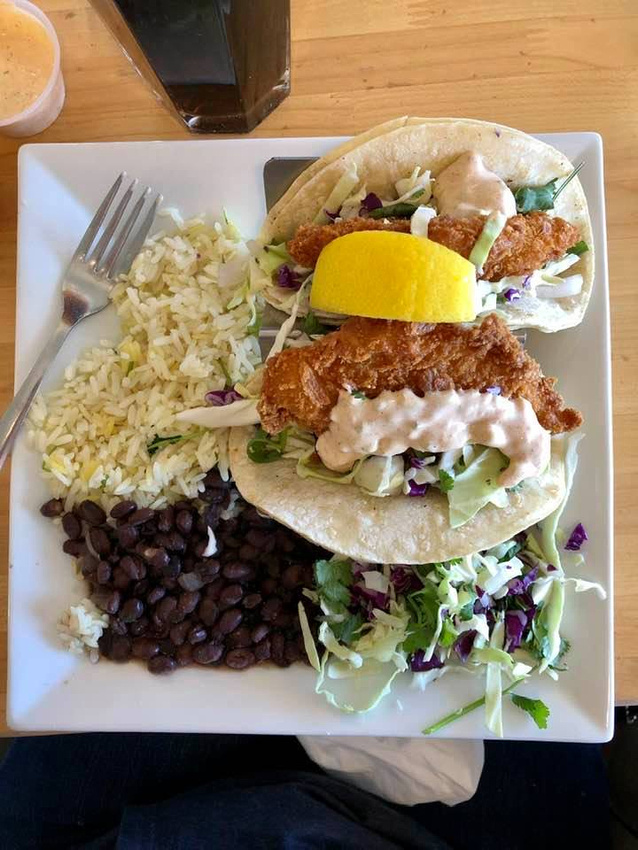