The week following Thanksgiving, my photo roadie and I (read:  husband) took a 5-day road trip through the desert southwest.  We visited a couple of national parks, a state park, and of course, Las Vegas.

Sometimes I forget how massive the desert southwest portion of this country really is!  It starts in inland California, and goes all the way across Utah, Nevada, Arizona, Western Colorado, New Mexico, and although I haven’t spent much time there … Texas.  In other words, it’s huge!  We left our home on the upper NE edge of the Colorado Plateau and drove all day the first day, without stopping, to get to Las Vegas.  As we drove southwest through the Utah desert, we were accompanied on the road by literally thousands of people driving home in the opposite direction as they returned home from their long Thanksgiving weekend out in the deserts of southern Utah, Southern California, and Arizona.  Billowing clouds of dustbowl era-esque dust and sand billowed behind them as they tried to avoid traffic and take a shortcut on the dirt side roads that front the interstate.

We suffered the longest traffic delays on the short 30 miles we drove through Arizona, as the road was in horrendous condition, filled with potholes and cracks.  They had lanes closed for construction as well, but it was impossible to tell what, if anything, they were doing.  At least there was no chance of anyone speeding through Arizona!

After driving all day, we were very tired when we arrived in Las Vegas, which was our first stop during this trip. Now neither one of us are big gamblers.  In fact, we’re not gamblers at all.  The only reason for me to stop in Las Vegas is because it happens to be on the way to wherever else I might be going.  Before this trip, I hadn’t been to Vegas since something like 2007, when I attended a travel convention there.  The city is constantly re-making itself, and so if you only show up there every 12 or 13 years or so, you’re likely to not recognize it.  Count me in with that group. After driving around in circles a couple of times, we finally found the correct offramp and checked into our hotel, which happened to be The Excalibur.

Oddly enough, this is the same hotel I had stayed at when I was re-locating to Colorado from California back in 1992.  It’s changed some since then.  In those days, I just drove up, parked my car, and walked into the lobby.  The place was still new back then, and there were no other hotels further to the south or west.  There was no Mandalay Bay, and no Luxor. It was just the first hotel I came to after driving through the desert in California for five hours.  Nowadays, I book way in advance so I can get the best prices and I don’t like taking chances that I won’t have a place to stay or that I’ll get over-charged.

So, here’s the killer about this place:  I booked way in advance and got a great rate of only $37 a night!  Heck of a deal!  Of course, they don’t mention on Travelocity that you’ll be charged an additional $50 resort fee and $15 a night for parking.  So, by the time it’s all said and done, you’re looking at $100 a lot more closely than you thought you would.  At that point though, I was so tired from driving all day, that I probably wouldn’t have blinked if they charged me $1,000 or more.  I just wanted someplace to sleep.

The only way to get to your room of course, is to walk through the casino.  I mean, right through it.  People are sitting at the machines, gambling and smoking.  Yes, you’re allowed to smoke in there.  Although my husband and I are not gamblers, I don’t mind occasionally dropping a quarter into one of the machines if I happen to be walking past or loitering nearby for some reason, but the machines these days only take cards.  I didn’t check it out too closely, so I don’t know if you buy a pre-paid casino card, or if they’ll take your credit card.  If I were a gambling woman, I’d say, just put your debit or credit card into the machine and start playing.  The house always wins.  No worries.

The place is filled with twenty-somethings; guys walking around wearing baggy pants, gold chains, and a baseball cap turned the wrong way and young women wearing mini dresses with spike heeled boots and stockings with holes and runners in them.  Most are carrying large containers of daquiri drinks that they’ve been nursing for an hour or so, or all night and day.  When they finally do finish their drinks, they just leave the huge plastic containers with straws and melted daquiri mix at the bottom, sitting around the casino or even outside on the sidewalks.  Workers come around periodically and pick up after them while they go crash somewhere and let the drunk wear off.

In spite of all of this, masks are required indoors and most people seem to be honoring that mandate in the shops and café’s along the strip.

Our room at The Excalibur was very nice to tell the truth.  I’ve paid twice that much for a room and had a terrible experience, but this wasn’t too bad at all.  The bed was comfortable, and the furnishings were quite nice.  The place was clean.  There was a little noise by one woman in the middle of the night, but all in all, not bad.

I was too tired to go out and photograph the city lights in the evening, so I got up well before sunrise the next morning to do a photo walk down the strip and try to catch some of the lights at that time.  Once I got outside the hotel and casino, it took me a few minutes to get my bearings.  When you’re inside those giant buildings, you can’t tell what direction you’re facing, or honestly, whether it’s day or night.  I soon discovered that Excalibur isn’t even on the strip, but I was able to get there very easily, since it sits right at the corner of Tropicana and Las Vegas Blvd. During my photo walk, I walked about 3.5 miles roundtrip, from Excalibur to Bellagio and back.

The thing about this walk that I noticed is that Las Vegas has gotten so much better at herding pedestrians than they used to be.  The elevated sidewalks with escalators that they have downtown, very carefully lead you where they want you to go.  You can’t just walk down the street like you used to in the old days.  I accidentally took a wrong turn at one point and ended up out in the middle of Las Vegas Blvd.  It was hell trying to get back to a safe place, as traffic was beginning to pick up around sunrise.  It added about a half mile to my walk.

There’s a fair number of homeless people sleeping in the nooks and crannies of town at night.  None of them bothered me.  Walking around a city in the dark isn’t for the feint of heart, but I’ve done it before, not only in Denver, but also in Las Vegas, so I figured I could do it again.  I did, but I had to really get my city mojo working for me, since I haven’t spent any time in the cities of this world since I moved to the desert in 2017.  It’s up to each person as to what they feel they are up for, but I usually don’t feel afraid walking around a big city either in the dark, or as the sun rises.  I act like I know where I’m going and what I’m doing. I keep my eyes peeled and so far, I haven’t had any trouble. I know that mankind is the biggest predator out there, and I act accordingly.

I’ve included some pictures I took on this photo walk.  None of them qualify as iconic Las Vegas city pictures.  They’re intimate views of lights, store windows and buildings. I do what I can to bring this massive urban jungle down to human size.    I’m more interested in the art of the city; the abstract designs, and the softer side of city life where I can find it. 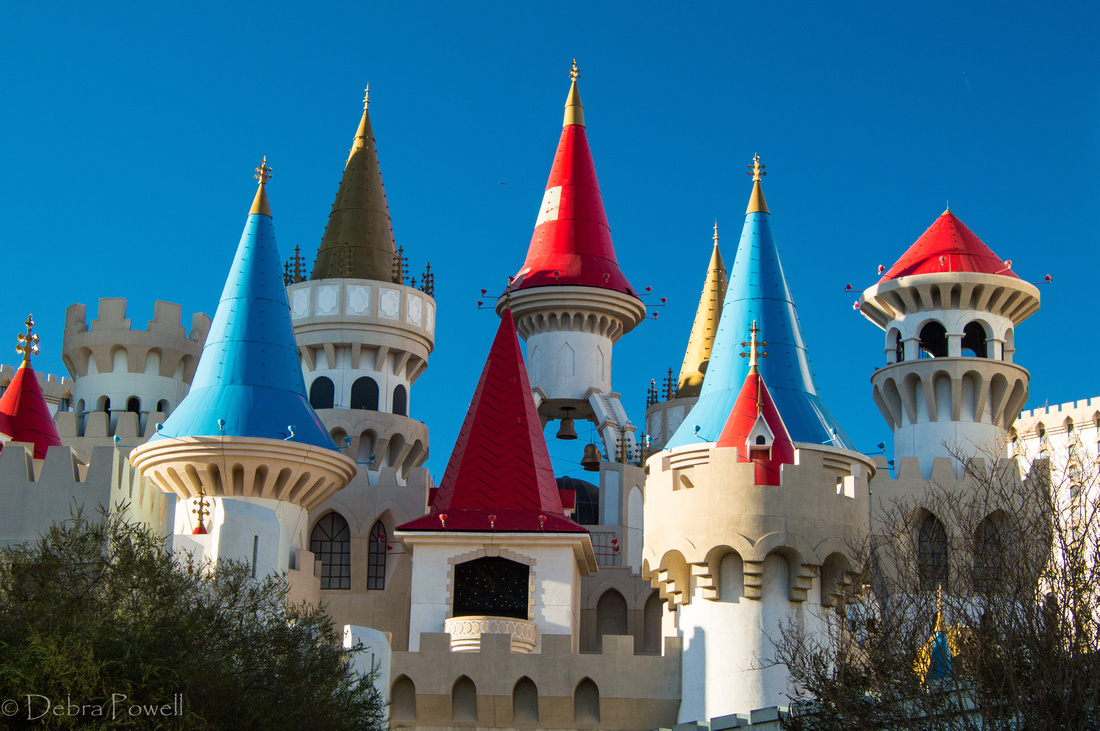 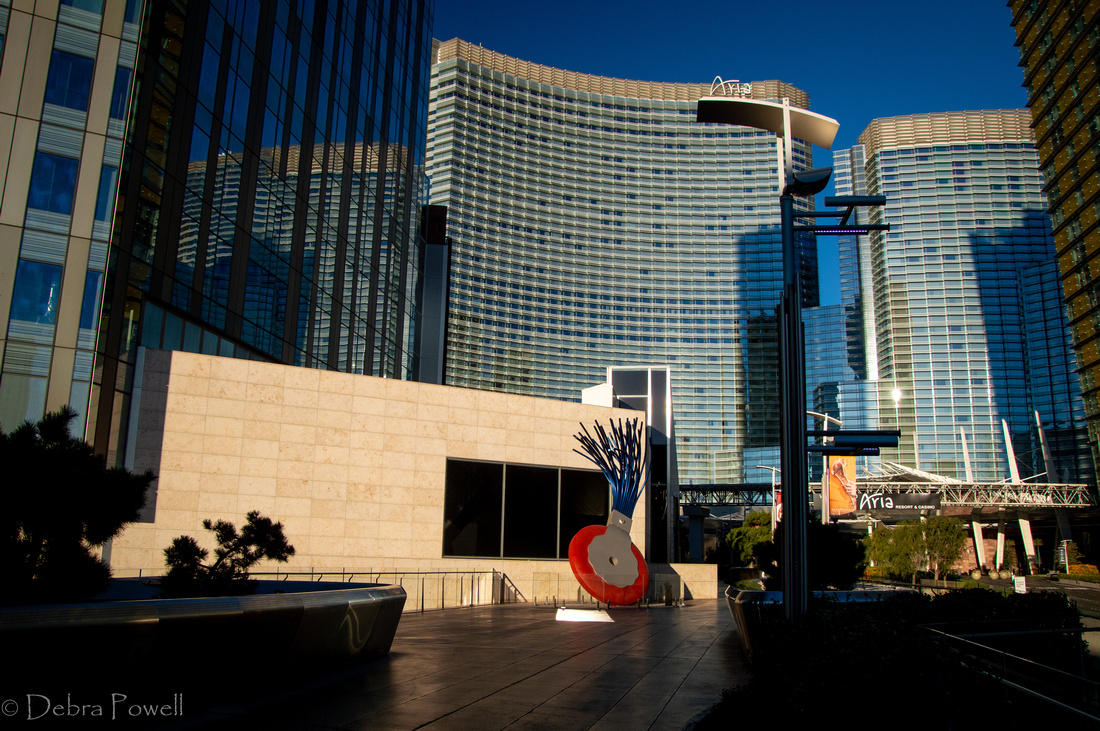 Typewriter Eraser by Claes Oldenburg and Coosje van Bruggen - they have large sculptures in many cities, including one in Denver, right outside of The Denver Art Museum.  I recognized their work right away, and just had to stop and photograph it.

This bridge is next to the Waldorf Astoria, Las Vegas 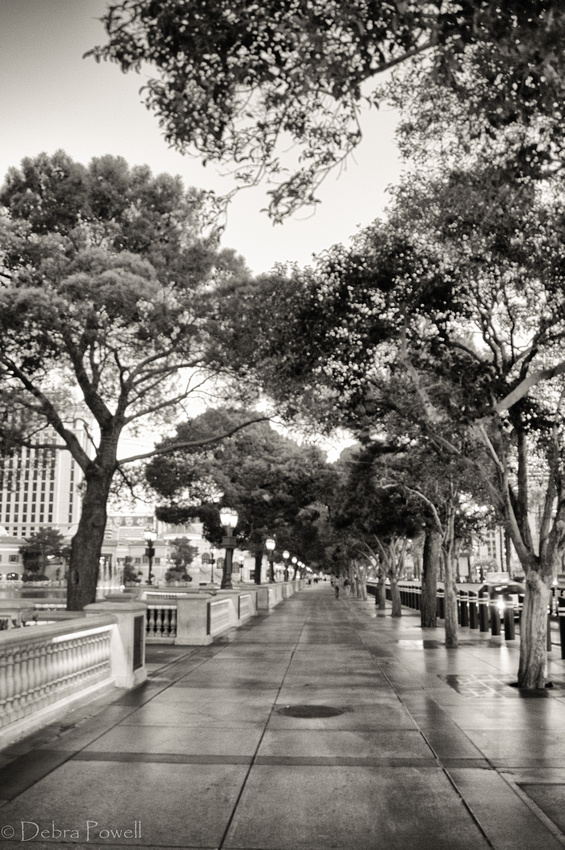 This sidewalk in front of Bellagio and right across from The Paris Hotel has a bit of a feeling of Europe to it. 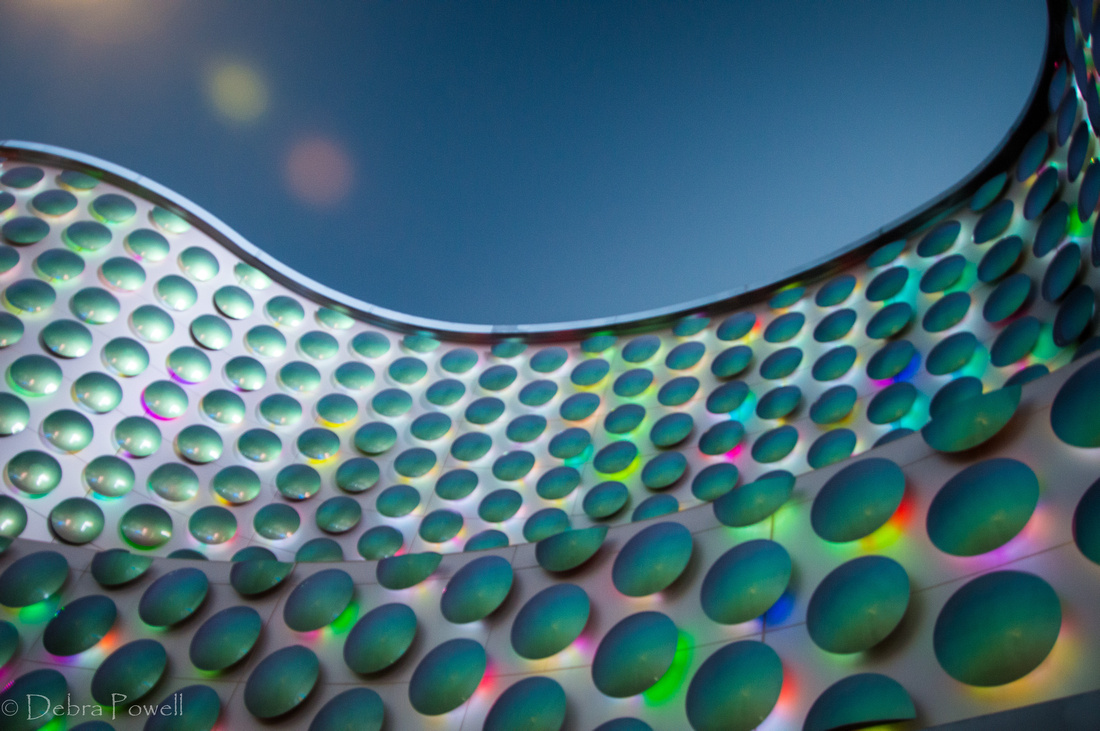 An abstract of a colorful, lighted sign on the Las Vegas strip

The Devil You say .... shop on The Las Vegas Strip 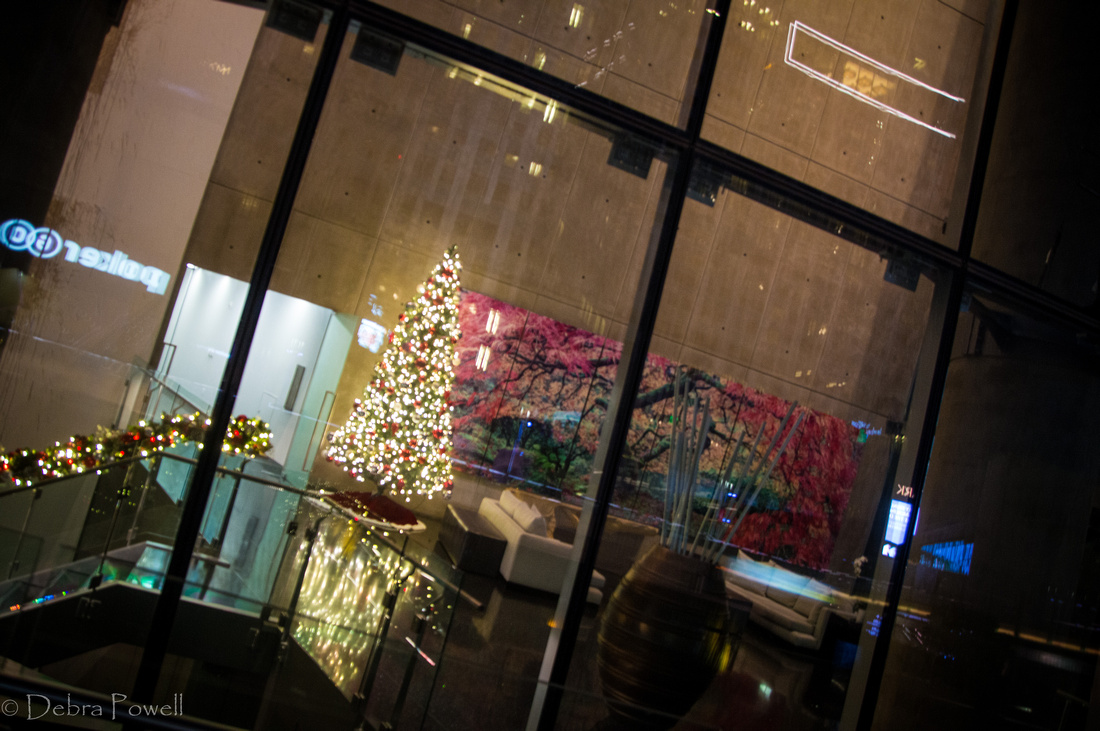 Hotel Lobby with a Christmas Tree and a large panoramic photo of the famous maple tree at Portland's Japanese Garden. 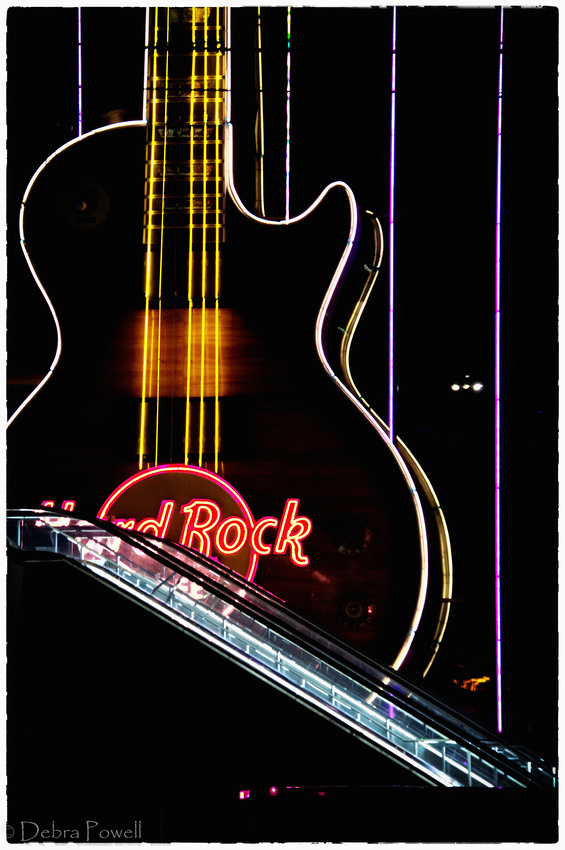 Part 2 is about our time in Death Valley National Park in California and I’ll be posting soon, either tomorrow or the next day.