It was near sunset when we left The Valley of Fire State Park in Nevada to make the drive to Bryce Canyon National Park in Utah.  It’s nearly a four-hour drive between these two locations, and that’s if you don’t stop for bio breaks or gas. John took the wheel.  We were in for a long evening of driving on dark, two-lane roads.  NOT my favorite thing!  At times I honestly felt as though I wished we hadn’t stopped at Valley of Fire, but then, in further retrospect, I’m glad we did.

We arrived outside of Bryce Canyon National Park about mid-evening, I would say about 9pm or 9:30pm.  We were dead tired from our day of driving, and especially the last 90 minutes or so, which were all on dark, two-lane roads which featured plenty of on-coming truck traffic.  We were booked for two nights at The Best Western Ruby’s Inn.  We were tired and a bit disoriented when we first arrived, and we couldn’t see where check-in was!  We drove around some buildings and parking lots and then noticed how big the place was, and that it continued down another block.  We crossed the street and parked there, in front of the office and staggered in.

We stayed two nights and were quite comfortable, except for the pillows.  Instead of full-sized pillows, they have the beds stacked with little square pillows.  They have pillowcases like bed pillows, but they’re more like throw pillows you’d put on a couch or something.  And they’re not soft!  It’s like putting your head on a rock.

We had some plumbing issues while we were there also, but they sent someone right over to take care of it.  The customer service is really very good.

I would stay there again.  I like the property and its location right outside the park.  They also have a campground and RV park if you’re into that sort of thing.

Before going to our room though, we stopped for dinner at the restaurant on the property, Cowboy’s Buffet and Steak Room. I liked this place a lot.  It has a great, comfortable feel to it and the people who work there are very nice.  Good service!  They specialize in home-cooked style food, which I thought was quite delicious.  That first night we were there, I had the hot turkey sandwich.  Ah!  Comfort food after several nights of chips and trail mix for dinner!  The open-faced sandwich came on Texas toast, which seemed a bit much to me.  I often remove the bread anyway when having a hot turkey sandwich, but in this case, there was no way I could eat that much thick-cut bread.  John had the country fried steak, which he also thought was delicious.  The second night, John had coconut shrimp and I had fish tacos.  Both were wonderful!  The portions were generous.  For me, overly generous.  There was certainly nothing gourmet or exotic about these meals, but the quality was excellent.  I wondered why more coffee shops and casual dining places don’t produce food of equal quality these days!

Your reservation at the lodge includes a free buffet breakfast at this restaurant also.  Once again, the food was good with everything ranging from scrambled eggs to French toast, waffles, and fruit.  Since the sun doesn’t come up until almost 7:30am in early December, I was able to get in a sit-down breakfast before heading out to the park.  They open at 6:30 am.

And I would be remiss if I didn’t tell you about the music in this place.  I think they probably use satellite music, but they started playing old-timey Christmas music right around Thanksgiving I would guess.  Most of it was old cowboy singers like Roy Rogers, Dale Evans, Burl Ives and some other names I can’t remember.  But it all sounded very familiar and reminded me of my childhood!  When you go here, you should be ready for a walk down memory lane.  It’s like a real-life version of the Donny and Marie show.  I usually get disgusted with overtly sweet throwbacks but for some reason, this settled really well for me.  Be prepared though!  If you’re sure you’re going to hate it, you probably will.  Or you can take a more easy-going stance and just settle back and enjoy it.  They probably play similar old-timey music at other times of the year, without the Christmas theme.  My guess.

This place is magical!  This is the best word for it.  Although hoodoos like these can be found in other parks and wild places the world over, this is the largest concentration of hoodoos in the world.  Their fantastic shapes make one think of all kinds of different things, from people, warriors, animals, buildings, you name it.

This is the second time I’ve visited the park, and it’s definitely worth going back again and again under different conditions.  For instance, seeing these hoodoos covered with snow would be truly amazing!  The park reminds me some of The Colorado National Monument, which is close to my home, in that you don’t have to hike it to appreciate the beauty.  The main road will take you all the way to the end of the canyon and drop you off at a large parking area, where you can easily take in the vista.  Then, you can work your way back stopping at the various viewpoints along the way.  This can be done in one day, or even one afternoon, but I would recommend staying at least two days, as I did.

I didn’t get up early the first morning, but kind of dilly dallied, resting a bit from my previous adventures.  Then, we set out mid-afternoon to get the lay of the land.  The light in mid-afternoon is – meh – but that’s the best time to do some photographic scouting.  You want to know where you want to be for upcoming sunrises and sunsets.  December is a good time to visit as well, because the crowds are greatly diminished this time of year.

One thing about early December though, is that the days are short.  Long shadows begin stretching over the canyon about 3:00 or 3:30pm.  Some things that you might find nicely lit on a late summer afternoon are in total shadow this time of year.  At some of the viewpoints, I noticed couples taking selfies and pictures of each other as they stood with the canyon behind them.  After snapping the photos, they left in a hurry, presumably to make it to the next viewpoint before sunset.  (As Clark Griswold said at The Grand Canyon in the Vacation movie, “um hmm, ah, huh, ok, let’s go.”) The thing that I felt sad that they didn’t seem to know about, was how the hoodoos glow at sunrise and sunset.  Of course, it depends upon what you’re trying to capture with your photos too.  The canyon makes a great backdrop for portraits, but you really should stick around for the main show as long as you’re here anyway…

Sunrise the second morning was fantastic!  As the sun lit up the hoodoos the place resembled a fairyland straight out of a Disney movie!  The hoodoos glowed like they were lit from within.  I put my 400 mm zoom lens into great use to capture some of this amazingness close-up.  The sky was clear the morning I was there, and so the show just went on and on as the sun lit up different areas in the canyon.  I visited a couple of viewpoints at sunrise, including the aptly named Sunrise Point.  The views are stunning from the viewpoints closest to the entrance to the park at sunrise.  It’s easy to walk between these viewpoints, but it’s probably faster to drive.  Either way works!

The next time I go, I’ll definitely be doing some of the short, easy hikes down in the canyon itself, such as Bristlecone Loop and Mossy Cave.  It’s not by any means the largest of the national parks, but there’s plenty to see and do in this magical place! 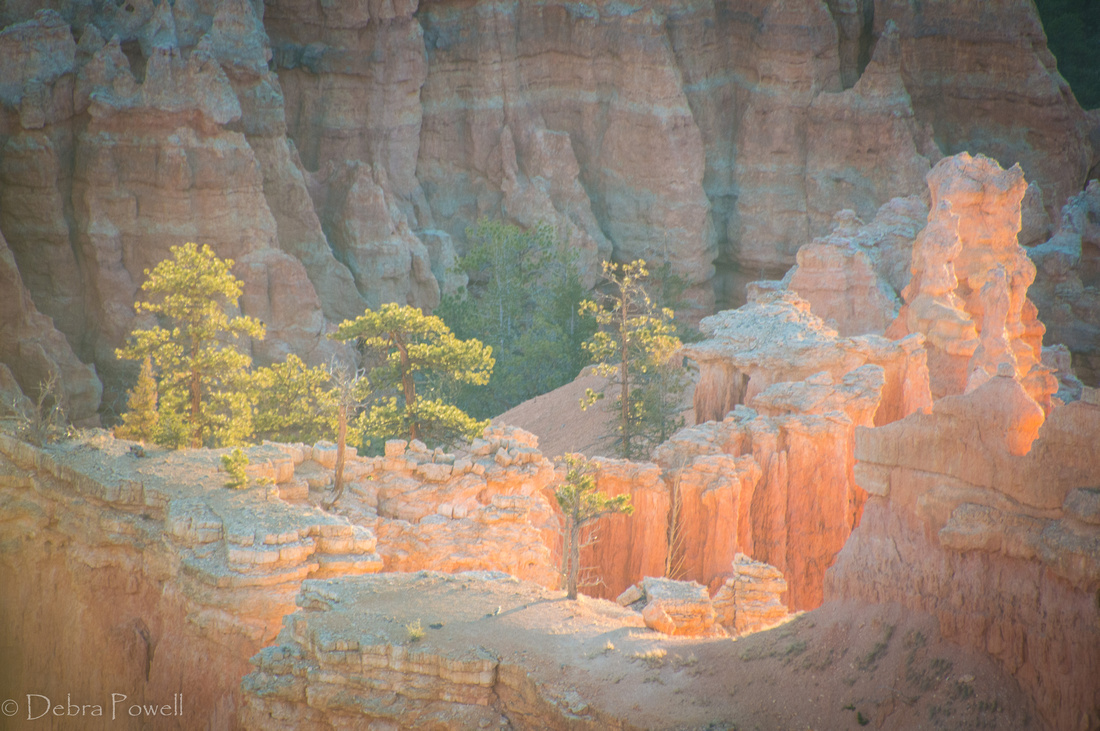 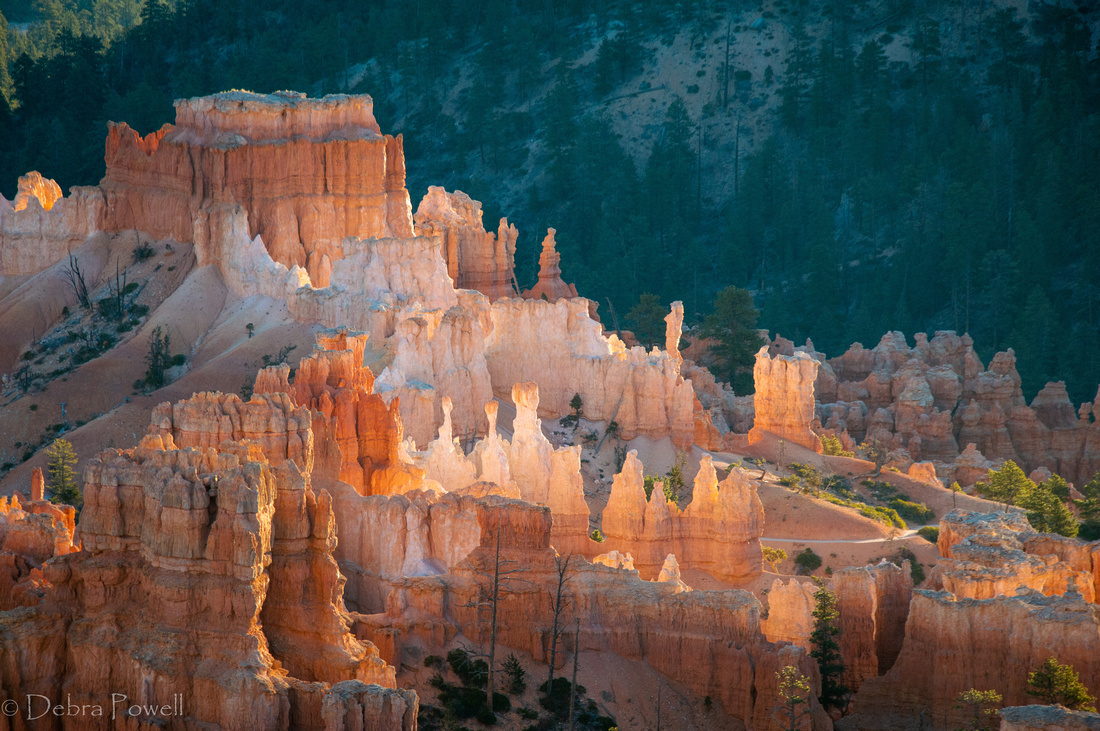 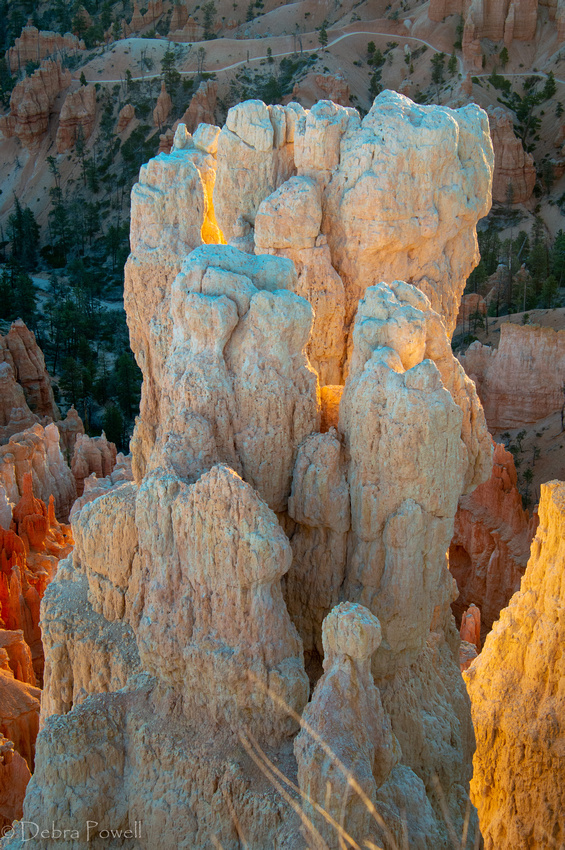